In order to facilitate discussions among all participants, we have a chat channel to discuss offline: Instructions here.

In ultra-relativistic heavy ion collisions nuclear matter is heated to about five trillion Kelvin, the temperature of the universe right after the big bang. In this regime, matter undergoes a phase transition into a plasma of quasi-free quarks and gluons: the Quark-Gluon Plasma (QGP). In the early 80’s, Bjorken suggested that the quenching of jets in hadronic collisions may signal the formation of a QGP. Two decades later, this phenomenon was observed at the Relativistic Heavy Ion Collider (RHIC) initiating a new program, that was carried over to the Large Hadron Collider (LHC) to investigate Quantum Chromodynamic (QCD) matter at high energy and high density.

Jets, observed as collimated sprays of energetic particles, were predicted by QCD to form in high energy collisions. In the last few decades, significant progress has been achieved in high precision computations that are crucial for precision QCD studies and BSM searches where jets constitute an important share of the underlying background. In the context of heavy ion collisions (HIC), jets undergo substantial final state interactions which cause them to lose energy to the QGP and alter their substructure. Understanding from first principles how a jet evolves as a multi-partonic system, spanning a large range of scales (from 1 GeV to 1 TeV) is essential to quantitatively probe the QGP. The successful description of bulk observables by viscous hydrodynamic calculations with a small viscosity to entropy ratio have led to the standard picture of a strongly coupled plasma. However, due to the property of asymptotic freedom in QCD, we expect that the produced matter behaves differently at smaller and smaller distance scales which can only be accessed with well calibrated probes, namely, QCD jets.

In recent years, jet physics in HIC has become an active field of study largely driven by the unprecedented experimental capabilities of the RHIC and LHC accelerator and detectors. In this context, jet substructure has emerged as a promising multi-dimensional tool to explore QCD dynamics and has already proved to be very useful in the context of heavy ion collisions.

Goals of the program

There are a couple of key physics questions we aim to address during the program that fall into three main topics:

One of the main goals of the RHIC program was the use of hard probes such as high pT hadrons formed by light and heavy quarks to investigate the QGP properties. This program culminated in the extraction of the transport coefficient by the JET Collaboration. However, many sources of uncertainties were reported which are mainly theoretical. Fully reconstructed jets allow a better theoretical control than high pT hadrons because they are less sensitive to non-perturbative physics and therefore should provide a better characterization of the QGP. Furthermore, major theoretical advances were made recently in understanding parton showers in a QCD medium.

3. Jet fragmentation in cold nuclear matter and the 3D structure of the proton/nucleus

The high energy and high luminosity Electron-Ion Collider (EIC) is the next generation machine which is aimed at exploring the structure of nucleons and nuclei. Among the goals of the science program are: solving the proton spin puzzle, investigating gluon saturation, exploring the phase space distribution of quarks and gluons inside the proton and the modification of the QCD fragmentation process in cold nuclear matter. It is expected that jet observables at the EIC will play a crucial role in answering these questions. Jets at the EIC will have relatively low energies compared to the LHC which is an interesting challenge and opportunity for QCD calculations.

Each week of the program will have a specific focus and during the week in the middle we organize an embedded workshop. An overview of the topics of each week is listed below:

In this week, we plan to discuss out-of-equilibrium dynamics of the QGP, in particular, the problem of jet dissipation and energy transport from hard to soft modes and its relation to wave turbulence.

This week will be dedicated to jet quenching in hot nuclear matter. The status of the theory of parton cascades in the presence of a dense colored medium and its implementation in Monte Carlo Event generators will be discussed. A particular focus will be on how jets, as extended multi-partonic systems, interact with a dense QCD medium, how color coherence is altered throughout the jet evolution, and novel jet substructure observables as a precision tool to investigate the microscopic properties of the QGP. Experimental and theoretical challenges will be addressed.

During this week a workshop will be organized covering all topics from this INT program.

Workshop title: “ Jet Probes of Hot and Cold Nuclear Matter: From the LHC and RHIC to the EIC”

In recent years, jets have emerged as essential probes of the hot, dense nuclear matter created in ultra-relativistic collisions of heavy ions. Advances in the theory of in-medium parton showers and jet substructure techniques have provided the tools to systematically explore the properties of the Quark Gluon Plasma (QGP) as well as the dynamics governing the passage of color charges through this medium. The same properties which make jets useful probes of the QGP, also make them attractive for studies of cold nuclear matter (CNM), which can be accessed via proton/lepton-nucleus and ultra-peripheral heavy ion collisions. These systems can be used to gain information on nuclear parton distribution functions and the initial states of heavy ion collisions and provide an important complement to heavy ion data.

The next several years promise to be an exciting time for the study of hot and cold nuclear matter with jets. Continued heavy ion running at the Large Hadron Collider will provide further data at the highest energies, while the completion of the sPHENIX detector and STAR forward upgrade at the Relativistic Heavy Ion Collider will enable a host of complementary jet measurements at mid to forward rapidities. It is also anticipated that the Electron-Ion Collider will begin operation around 2030, ushering in a new era of precision measurements of the properties of CNM via electron-nucleus Deep Inelastic Scattering.

The goal of this workshop is to bring together theorists and experimentalists interested in jet observables from both the hot and cold QCD communities to review the state of the field and discuss synergies between A+A, p+A, and e+A measurements. This workshop is part of the broader INT program: Probing QCD at High Energy and Density with Jets, which will focus on a number of topics including jets and thermalization in non-abelian plasmas, parton showers in high-density matter, jets in cold nuclear matter, and new jet observables. We anticipate accommodating a mixture of invited and contributed talks covering all of these topics.

This week will be focused on the study of jets in electron-nucleus and proton- nucleus collisions. The physics topics to be covered during this week are: Jet energy loss in cold nuclear matter that gives information about the transport properties of QCD matter. Nuclear structure, which encompasses the gluon saturation regime, that is a property of the coherent soft gluon sea inside the nucleus, and the 3-D structure of the proton/nucleus and their spin decomposition.

This week will focus on new jet observables that fulfill the following two criteria: calculable from first principles and experimentally measurable. The goal is to identify suitable observables that will allow us to probe QCD dynamics with high precision. 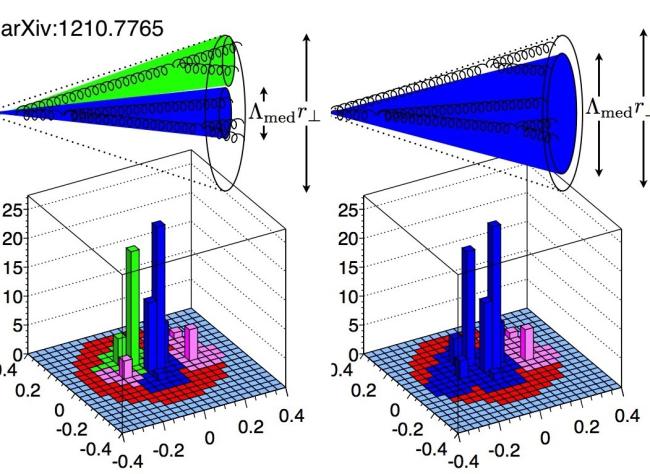